Many workshops offered during the recent Great Lakes Inter-Tribal Food Summits of 2016 at Red Lake, Minnesota, Madison and Camp Jijak in 2016 and 2017 have involved the gathering/harvesting of resources and their processing of some of these foods into Value Added Products (VAP) for storage, future, or a diversity of uses in their new condition. Some products gathered are always used on site in order to facilitate sharing of traditional food preparations and ancient or contemporary recipes.

Amongst those products include what the Ojibwe called Mandamin (The Great Seed) or corn and for which there has been some 350+ varieties amongst tribes identified so far. May varieties of Indian corn have been lost —  to history, maybe Mansanto, or caches that are yet to be found. A good example might be the White Flint Corn described as growing on Madeline Island, in Lake Superior — also know as the former capital of the Ojibwe Nation, a variety of corn that is described as growing there in the 1700s.  While it is possible, and probably likely, that the White Flint grown there is related to other northern Wisconsin, Great Lakes or Island flints that are well known, (Like Bear Island White Flint) and could be connected genetically to the Madeline Island gardens, to date there has not been a Madeline Island White Flint Corn seed, or seed cache identified in seed repositories, museums or private collections.

Lac Courte Oreilles Ojibwe elder George Martin, assisted by Buddy Raphael (not shown) discuss the boiling process for making parched corn into hominy. Raphael says he likes to let his corn dry for over a year before using it for cooking and other needs.

After the parched corn is boiled in an alkaline solution for a lengthy time period, in this case hardwood ashes and for some tribes maple ashes in particular rather then lye, lime or baking soda, the corn is then transported to a screen for further cleaning. By now, a thin outer shell and little seed connection nub should come off easily from the corn kernel when rubbed between two fingers. The boiling in ash, or lime process changes the chemistry of the corn, contributes calcium, potassium and trace minerals to the corn and makes it more nutritious while at the same time loosening a thin outer shell casing from the kernel.

The cooked corn is transported to a screen for further cleaning, drying and discussions with Camp Jijak participants.

The Oneida’s of Wisconsin hand pick and dehydrate much of their white flint corn and then prepare it in this similar manner and in some cases they will boil it again for grinding and making corn meal while adding kidney beans and making small round loafs to refrigerate for storage. Hopi people of the Southwest used ground blue corn mixed with small amounts of willow wood ash to prepare piki, a thin, crepe-like, blue bread. A porridge made from hominy in the south is called grits. Many tribes had their own technique for preparing their corn for future storage and seed keepers have identified over 300 varieties of corn grown historically in Indian Country with some sweet varieties not suitable for making hominy. 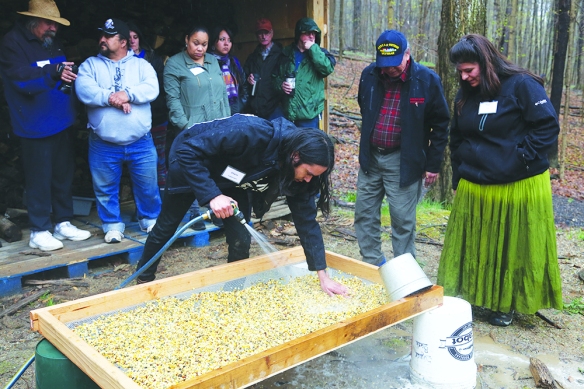 Below: Buddy Raphael provides some traditional teachings and advice for making corn hominy. 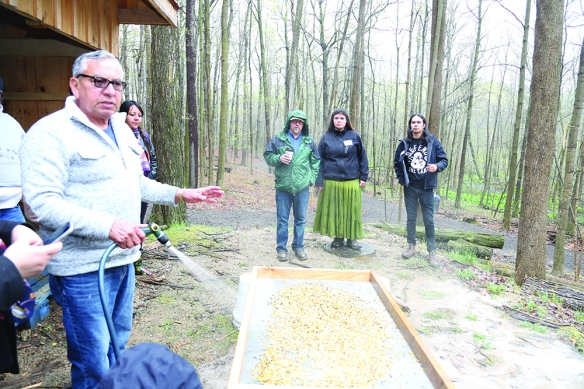 For more information on programs provided by the Intertribal Agriculture Council (IAC) you can go on the net here:  IAC

One of the world’s wonderful speakers about the nature of, treatment, care and planting of seeds is Akwesasne Mohawk seed keeper Rowen White. Through several workshops in the Great Lakes and at the Gun Lake Pottawatomi tribes’ Camp Jijak in 2016 and 2017 White has led discussions on the cultural treatment, history and love of seeds that Indigenous people have.

White also brought some of her wonderful and extensive seed collections to assist in teaching people about the role of labeling, organizing, acclimating and caring for seeds for storage and planting. At just about any event that Rowen attends, there will be an abundance of seeds to look at, and in many cases share or exchange.

According to Rowen White “once you step on the seed keepers path, you will have more seeds then you know what to do with, because seeds, they are always multiplying exponentially.”

Many of the conferences, sponsored in part by the Inter-Tribal Agricultural Council (IAC) are meant to help bring and grow opportunities for American Indian farmers, growers, forage and gatherers and enhance the ability of Indigenous communities to become food self-sufficient once again.