The 2017 Great Lakes Intertribal Food Summit was held from April 19-23 at Gun Lake Pottawatomi’s Jijak Camp near Hopkins, Michigan.  Over the five days, participants learned about both traditional foods and modern production practices through a range of workshops and hands-on learning and sharing opportunities.

The 2017 agenda expanded upon past events with additional emphasis on traditional tools and further integrating food preparation into the program. 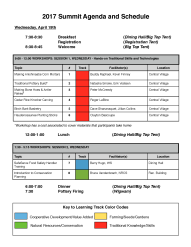 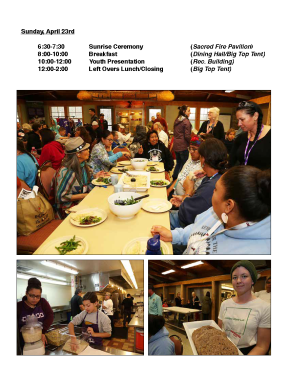 Wednesday’s opening activities concluded with a bonfire that brought everyone together to wood-fire four clay pots that were then available for cooking throughout the event.  Traditionally, these type of clay pots were vital cooking tools that could (and still can) be used directly in a fire.  Of course the bonfire also provide a great opportunity for everyone to connect and discuss their experiences from the first day. 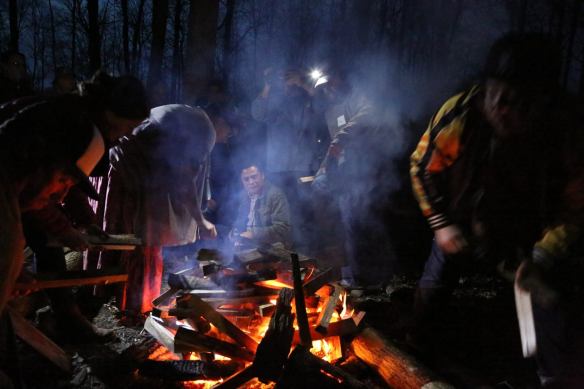 The 2016 Great Lakes Intertribal Food Summit featured buffalo and churro lamb meat that was processed onsite in a butchering workshop.  Challenges in sourcing a local buffalo and desire for an even more comprehensive butchering workshop evolved to bringing a live churro sheep that was ethically slaughtered by Aretta Begay from the Navaho Churro Sheep Association and a team of volunteers, including fellow Navajo, Brian Yazzie.

Indigenous foods like corn, potatoes, tomatoes, beans, cacao and squash are huge components of the modern global food system, yet many people have little awareness that each of foods originated in Turtle Island.  This summit focused on those foods from both the production and culinary preparation perspectives. 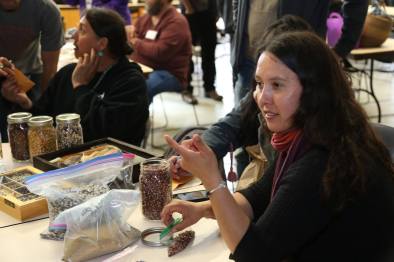 Without seeds, there are no plants or the foods they provide.  In today’s modern world, it is easy to go to the store and buy seeds to grow a garden or field, but our ancestors needed to save seeds in order to grow plants the following year, resulting in an amazing diversity of plant variety color, tastes, and suitability for localized growing conditions.  Modern Indigenous leaders like Rowen White and Clayton Brascoupe are helping to reinvigorate these traditional ways through groups like the Indigenous Seed Keepers Network (ISKN) that is working to teach seed keeping and reconnect ancestral seeds from the communities where they originated.  The summit featured four seed keeping workshops, plus a seed exchange where knowledge, inspiration, and seeds themselves were shared.

The summit also included numerous workshops on agricultural production, including soil health, forest management, conservation planning, season extension, grazing management, hands-on field preparation and planting, and cooperative development and value added production.  While “experts” shared their knowledge on these range of topics, the workshops also provided a forum for participants to share what works best for them and discuss the challenges we all face in growing foods for both market and our communities and families.  These workshops also placed an emphasis on hands-on learning where participants spent large portions of the workshops outside rather than simply in a classroom listening to a powerpoint presentation.  These field sessions help to reinforce the learning and knowledge by increasing engagement. 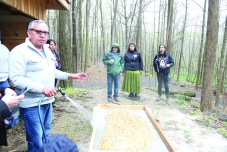 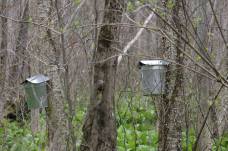 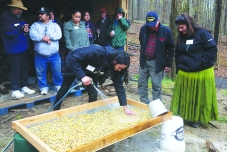 Hosting the summit at a venue like Gun Lake Pottawomit’s Jijak Camp provided unique opportunities for harvesting and processing foods as part of the workshops and then using those foods as part of the meals served throughout the event.  Wild ramps and onions, mushrooms, and an assortment of forest plants were gathered and sent directly to the kitchen.  Other foods like hominy corn were processed and then included in meals.  This type of educational approach reinforces the learning by immersing workshop participants in the process so they understand the full story of these foods and are then better able to bring the knowledge and inspiration back to their own communities. 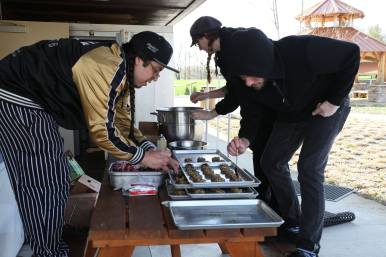 All meals for this five-day summit were prepared onsite by a team of Native chefs using Indigenous ingredients.  Rather than pay high prices required for conference center catering, this event put those funds into bringing about two dozen chefs out of the roughly forty chefs submitted applications to join this team.  Feeding close to 300 people 3 meals/day is an enormous task, but this team did a tremendous job, incorporating education throughout the process.

The Taste of the Tribes on Saturday afternoon was one of the highlights of the event, giving each chef or teams of 2-3 chefs the opportunity to create their own dishes, reflect the regional cuisines from their home regions while including a theme of Great Lakes ingredients. 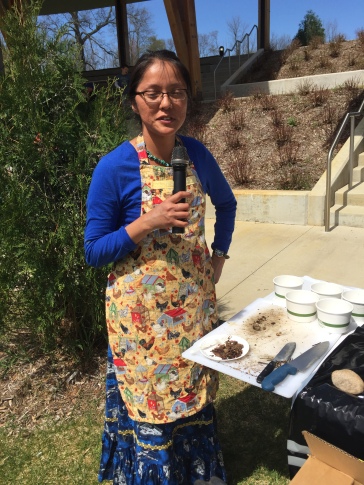 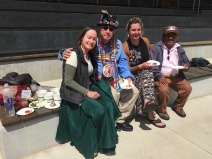 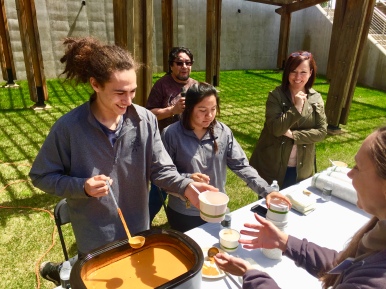 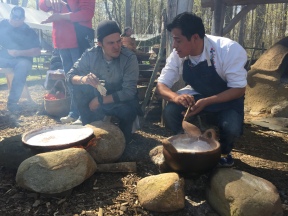 Realizing that addressing the food and agricultural challenges faced by our Native Nations ultimately requires looking long-term by investing in and supporting our youth, this summit included a concurrent Great Lakes Region Youth Summit that brought together youth from not only across the region but a couple other regions as well.  These youth participants spent time learning together as well as having the freedom to explore and participate in in the broader summit.  Youth also had the opportunity to cook with the chefs and then serve food to the entire summit audience.

The Intertribal Agriculture Council and the rest of the planning team thanks the Gun Lake Tribe and each of the summit participants and sponsors for making the 2017 Great Lakes Intertribal Food Summit such a successful event.  Discussions are underway for additional events in 2018 with a similar comprehensive approach. 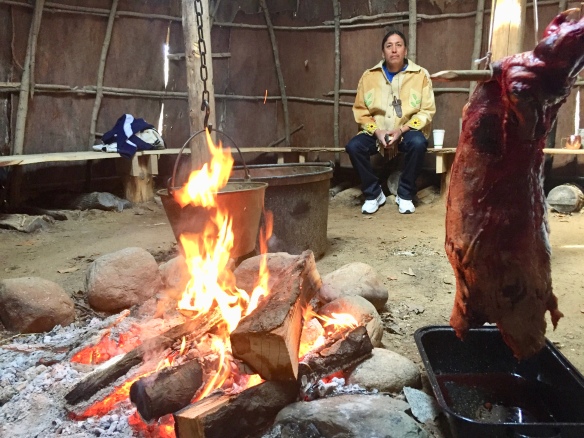 Here is Kevin Finny, former Director of the Jijak Foundation for the Gun Lake Pottawatomi in Michigan speaking about the use of American Basswood, one of several species of trees identified during the fall 2016 Intertribal Food Summit held on the Red Lake Ojibwe Nation during September.

With Kevin Finney, former executive director of the Jijak Foundation and Tashia Hart of the Sioux Chef Team in the woods and fields of Red Lake Ojibwe Reservation foraging for food, fuel and medicines as part of the Great Lakes Intertribal Fall Food Summit during September of 2016.

During the 2016 Intertribal Food Summit the Saturday’s most favorite presentation were the Chefs special Food Festival — where each chef or team had a chance to prepare and serve to participants their special main dish, salad or dessert.

Foraging and Harvesting from the Forest

One of the featured workshop of the Intertribal Food Summit is the Foraging for Food workshops. At the Red Lake Intertribal Food Summit it was called “Harvesting from the Forest” and was be led by Tashia Hart of Red Lake, who works with the Sioux Chef, Sean Sherman. Many other participants assistde in identifying and harvesting for the feasts, plants and medicines that are commonly used by Indigenous people for health and nutrition.

Buddy Raphael and the family Bootagan

Buddy Raphael discusses the family Bootagan that they use to grind rice, corn, barley and other products. The Bootagan, or grinding (smashing) cylinder is made of birch and Buddy worked with several participant to help them build their own. The next video below is also about making a Bootagan.

Participants at the 2017 Great Lakes Intertribal Summit are shown how to make and use a traditional corn, rice, barley mortar for pounding into meal.

Touching base with just one of several Indigenous chefs in attendance at the 2017 Great Lakes Intertribal Food Summit at Gun Lake’s Camp Jijak.

Foraging at Jijak for Food and Salads – 2016

Participants of the 2016 Intertribal Food Summit at the Gun Lake Pottawatomi Tribe’s Camp Jijak forage for food and medicine for the event’s meals, while learning about plants and medicines from the woods.

One of the featured workshops of the Intertribal Food Summits that have been held in the Great Lakes region is the Foraging for Food workshops. At the up and coming Red Lake Intertribal Food Summit during September 16 & 17th it is called “Harvesting from the Forest” and will be led by Tashia Hart of Red Lake, who works with the Sioux Chef, Sean Sherman. Several other participants will be assisting in identifying and harvesting for the feasts, plants and medicines that are commonly used by Indigenous people for health and nutrition.

Paul DeMain and the Intertribal Agriculture Council take you on a short walk along part of Camp Jijak’s Maple sapping lines and then over to the Jijak Foundation’s Sugar Shack built at the camp for use by members of the Gun Lake Pottawatomi Tribe. Kevin Finney, the Executive Director of the Jijak Foundation explains some of the things to consider when using an evaporator for making syrup during the spring 2016 Great Lakes Intertribal Food Summit near Hopkins, Michigan.

Kevin Finney the Director of the Gun Lake Pottawatomi’s Jijak Foundation and camp describes to visitors the beginning of a renewal in local tribal interest in tapping for Maple and other species for sugar, syrup, food and medicinal products. The Jijak Foundation and the Intertribal Agriculture Council (IAC) have focused several Great Lakes regional conferences on food sovereignty, Native harvesting, and Indigenous culinary development.

Introduction to one of several workshops at the Great Lakes Intertribal Food Summit devoted to collecting seeds and creating seed banks, how to prepare and preserve your seeds is given by Rowen White, (Akwesasne Mohawk).

The day before the official opening of this year’s annual Great Lakes Intertribal Food Summit, Kevin Finney the director of the Gun Lake Pottawatomi Tribe’s Jijak Camp, the host of the event discusses evaporating at the Tribe’s sugar shack.

The four day conference opened on Thursday April 21st, with 4 days of activities around Food Sovereignty with Indigenous growers, producers, program managers and agency resources on site. The conference also features over a dozen Indigenous chefs from through-out the western Hemisphere cooking the meals with Native foods, spices and medicines.

Here is the almost final program for the 2016 Great Lakes Intertribal Food Summit (click the link below).  We’re working on a few small updates before sending the printer, but here’s your first sneak peak.  Among the many highlights, we’re excited to feature